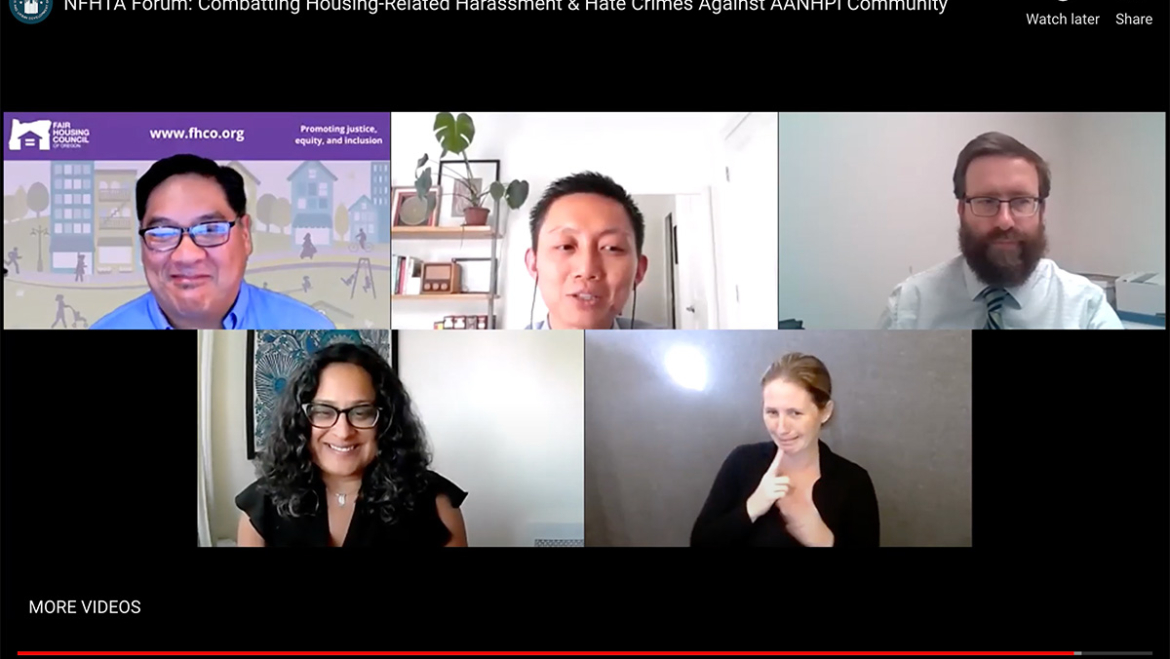 “You can’t change any society unless you take responsibility for it.” —Grace Lee Boggs

As a Thai American and as a technical assistance provider, I hold the words of first-generation Chinese American and intersectional feminist Grace Lee Boggs close to my heart when I think about how we can improve homelessness systems and make them more accessible to the Asian American and Native Hawaiian/Pacific Islander (AANHPI) community.

Boggs was a proponent of the “curb-cut effect”—the assertion that investment in one group can cascade up and out and be a substantial investment in the overall well-being of a nation. “We need to discern who we are and expand on our humanness and sacredness. That’s how we change the world,” Boggs stated. “The only way to survive is by taking care of one another.”

Why is AANHPI Month celebrated in May?

AANHPI month was the brainchild of Jeanie Jew, a former Capitol Hill staffer whose great-grandfather, M.Y. Lee, left China for the United States in the 1800s before he helped build the transcontinental railroad. Lee rose to prominence as a successful businessman in California, only to be killed in an act of anti-Asian hate during a period of unrest and anti-Asian sentiment. Jew hoped to transform her pain into a positive force, establishing AANHPI month as a time to reflect on the achievements of Asian Americans.

Who falls under the term “AANHPI”?

The term “AANHPI” encompasses a vast range of countries, ethnicities, nationalities, and identities. According to the Asian Pacific Institute for Gender-Based Violence, the federal government defines the term to include “all people of Asian, Asian American, or Pacific Islander ancestry who trace their origins to the countries, states, jurisdictions and/or the diasporic communities of these geographic regions.” The term “AANHPI” is distinct from its shortened form, “AAPI,” by intentionally naming Native Hawaiians as distinct from the umbrella term “Pacific Islander.”

We must embrace and act upon the diversity within the AANHPI community.

The AANHPI community is the fastest-growing population in the United States and encompasses original peoples of the Far East, Southeast Asia, and the Indian subcontinent. The Asian American (AA) and Native Hawaiian and Pacific Islanders (NHPI) population consists of more than 50 distinct ethnicities in the U.S., which must be recognized to curtail the risk of culturally flattening or erasing diverse languages, cultures, and contemporary political issues that are important to each.

The assumption that the Asian American experience is monolithic can have real social and political consequences. Asian American poverty and housing instability can go unseen due to the persistence of the “model minority” myth, a narrative that Asian Americans are generally more educated and better off than the average American, allowing the struggles of more than two million Asian Americans living in poverty to be unacknowledged.

According to the National Low Income Housing Coalition (NLIHC), one in four AANHPI households are severely housing cost-burdened. NLIHC uncovered the unique discrimination that specific ethnic subgroups faced: Bangladeshi, Vietnamese, and Pakistani renters experience the highest rates of severe cost-burden at 41%, 34%, and 34%, respectively. In addition, 54% of severely cost-burdened AANHPI households are limited English proficient, making it difficult for these groups to access housing services. Asian American and NHPI (Native Hawaiian and Pacific Islander) households also have a higher probability—four and seven times more likely respectively than White households—of being multigenerational, which can lead to overcrowding. In addition, the Asian American homeless population is undercounted. At a macro level, Asian Americans appear to have the lowest (4%) rates of homelessness, but when broken down by subgroups, National Alliance to End Homelessness identified the NHPI population to have the highest rate of homelessness in America.

We must stand vigilant against anti-Asian hate and promote trauma-informed care.

Cloudburst recognizes the relationship between trauma and service systems and the importance of promoting trauma-informed care in our capacity-building work with our clients. In light of recent White supremacist hate crimes carried out against the Asian American community, it is doubly important to recognize that the racial traumas experienced by AANHPI communities are unique, distinct, and rooted in White supremacist history.

These distinct traumas can range from surviving war in Laos, Cambodia, and Vietnam communities, remembering the internment camps built by the United States for the Japanese American community during the World War II era, and living through discriminatory immigration laws and labor exploitation for Chinese-Americans; also included is the anxiety felt by the children of first-generation immigrants to reconcile their cultural heritage with American life.

In addition, for second-generation Asian Americans, intergenerational trauma—trauma that is the result of adverse experiences that pose a threat to survival such as genocide, racism, and sexual abuse—inherited from their immigrant, forced migrant, or refugee generational relatives can cause second-generation AANHPI to struggle to identify and express their feelings due to a lack of psychological support and mental health stigma.

What is Cloudburst doing to uplift the AANHPI community?

Amid the COVID-19 pandemic, acts of violence and harassment against the AANHPI community have spiked, many of these targeted harassment occurring in a housing setting, violating the Fair Housing Act. Cloudburst hosted a forum under the National Fair Housing Training Academy (NFHTA) on Combating Housing-Related Harassment and Hate Crimes Against the AANHPI Community to provide our fellow practitioners and agencies with the legal resources necessary to exercise vigilance against racially motivated acts of discrimination and harrassment that prevent the AANHPI community from obtaining fair and safe housing.

For the United States Department of Health and Human Services (HHS’) Office of Family Violence and Prevention Services Act (FVPSA), we are also providing grants management and administrative support with increased funding under the American Rescue Plan to the Asian Pacific Institute on Gender-Based Violence to expand culturally specific sexual assault and domestic violence services to adult, child, and youth survivors from racial- and ethnic-specific minority groups and underserved populations.

This piece is dedicated in honor of the victims of another act of senseless anti-Asian violence in Laguna Woods, California, on May 15, 2022.

Are you AANHPI or Asian American?

How Asking Questions can lead to Empowering Others: Michael Omi

Responding to Housing Insecurity and Homelessness

Share It
0 Comments
On Considering the Cost of Corruption
May 13, 2022 0 Comments