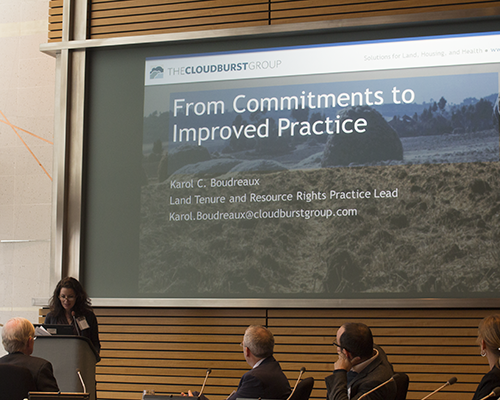 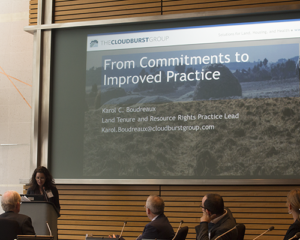 Ms. Boudreaux applauded Coca-Cola’s attempt to “do the right thing” by confronting illegal land taking by its sugar suppliers but she questioned whether Coca-Cola had the rights tools and methods to assess complex land right issues in the countries where it is sourcing sugar, such as Colombia and Guatemala. In these countries, as in much of the developing world, rights to land and resources are frequently unclear, poorly enforced and governed by complex and often overlapping laws, regulations and customary authorities. Determining who has rights to own and occupy which pieces of land can be very challenging – particularly in post-conflict countries and when private sector actors do not have expertise in conducting land tenure assessments.

Reuters covered the discussion, during which Ms. Boudreaux asked:

“How did the owners acquire title documents? Were communities consulted? Were they compensated for their land? Were women’s title considered?” Boudreaux said at the World Bank session on Tuesday.

“I cannot tell from the evidence that Coke presents,” she told Ed Potter, the company’s director of global workplace rights, who agreed to take her advice and improve the company’s review processes.

On International Day for the Elimination of Violence against Women, we’d like to highlight that Native women are 2-3x more likely than women of any other race to experience violence, stalking, or sexual assault. Visit @niwrc for more info on how to #EndGBV against Native women.